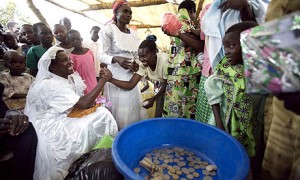 I spent last summer visiting a few tribes in Nigeria and for each of them I ensured I attended a wedding before I left; not only to observe the various wedding dresses but also to have a wholesome experience their various wedding cultures. I discovered a number of practices similar to what we do in Europe. The subject of the bride price and dowry particularly fascinated me and while these mean different things to different people in their different cultures, in Africa, religion has a role to play in what rites and practices are upheld.

The bride price is a very important part of the wedding rites. In fact, until the would-be groom fulfills the bridal price requirements he cannot “˜have’ the bride. The Bride price is just as the name goes; a price paid for the bride. In certain quarters especially among the younger generation, it is argued that collecting a bride price is wrong as it signifies that the bride’s family is “˜selling their daughter off at a price’. The elders refute such claims saying that anyone who needs someone else’s daughter must prove his seriousness and commitment to her upkeep and wellbeing by paying a price.

In some parts of the Igbo culture in Nigeria, the groom is made to pay more than just an amount for the bride price but must also provide the money for the wedding dresses of not just his bride and her mates but for the bride’s families as well. In the one I attended, the would-be groom and his bride fell on their knees pleading that some of the requirements on the “˜list’ be truncated off. My host would explain to me later that such acts could rip off the groom of so much money that when they eventually begin living together as man and wife, upkeep would be tough for the following months. 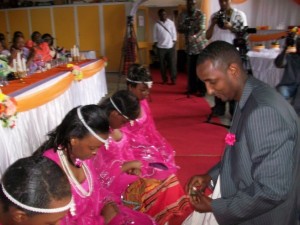 In some other areas in the Igbo tribe, the amount for the bride price is fixed and has been passed on generation after another. The equivalence today is very little but the groom must prove that not only will he take care of the bride but will also be a “˜good in-law’, showing his commitment to the needs of his in-laws when the needs arise. In the Sub Saharan countries, both families must have series of meetings where they must negotiate the value of the bride price. For these, the negotiation is a vital part of the wedding rites. Usually the bride’s family knows there are things on the list they can “˜waive’ and the groom’s family has the right to question some things on the list. The practice aids in fostering unity and togetherness in the families becoming one.

One wonders what becomes of the bride price if the groom dies after they had married. This varies from people to people and of course also on the circumstances surrounding the death of the groom. For some, the family will return the bride price and not the wedding dresses while taking back the lady while in some, another member of the family takes the bride as his since it is believed that a woman is married to the entire family not just the groom.

Young Mother of the little Emma born 30 January 2012 and Leonie born February 7, 2013. My articles are about gowns shopping, haute couture cocktail dress and customization of evening gowns. I love blog and I do have a lot of experience and knowledge about custom made women evening wear. Thanks in advance for being here to cultivate your personal interest as well! View all posts by Yasmine Alice De Jessica