According to the Daily Mail of British, it is reported that a Canadian girl Jori Phillips, who is just 21 years old, spent a few months in making a stylish skirt and a matching hat by using nearly one-third of the old dictionary. Her creativity makes a lot of people admire so much. Of course, it also makes her and her creative formal dress become known for many people from all over the world especially for the fashion world. 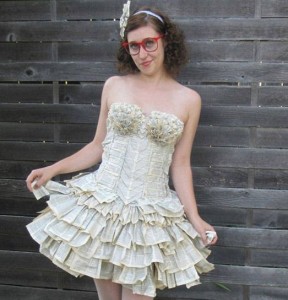 How did she make it? It was just a dictionary which had thousands of yellow papers. And the designer, Phillips cut all the papers down and stuck them together with glue one by one. After her hard working as well as creativity, she made this beautiful strapless dress folds finally. Because of its special material and beautiful design, most of Phillips’s friends are fond of her dictionary style formal dress. At the same time, a large amount of people even became her fans. 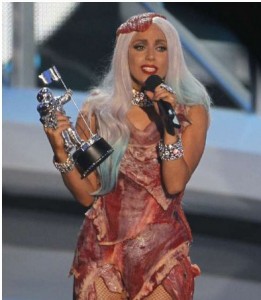 After being known for the dress, many professional designers came to make observations on the design. Although many designers and circus actors said that the formal dress is not applicable in real life. First of all, it is because they think this dress cannot be worn in the rain as it is made of papers. Secondly, it will also make the girls who wear it barely sit when wearing because it will make the dress crumple. Phillips acknowledged the reasons mentioned above. In addition, she was still afraid that the dress will be rotten by her sweat. Although there are many disadvantages, countless professional designers still support the special idea of Jori Phillips and advised her to make full use of her creativity to make her designs much better. 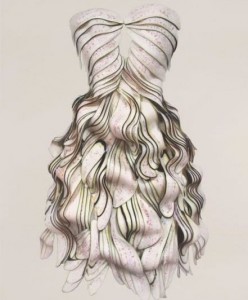 Do you remember the formal dress which is made of butchers meat that worn by Lady Gaga? Maybe it is still unforgettable for many people especially for those who pay attention to fashion as its creative design. It also attracted attention of both people and media at the moment it was shown to the world. However, compare with the dress that designed by Jori Phillips, although it is as creative as that of Phillips, it is less beautiful than dictionary style.

Of course, such creative idea should be promoted, but it is obvious that the designer of butchers’ meat style formal dress needs to learn more in the dressing design. Sung Yeonju is a young artist who comes from Korea. She does well at designing formal dresses by using the material of food. She makes full use of unique textures of food to generate unique styles formal dresses. These fruits and vegetables generally reflect the feeling of beauty successfully that the clothing material cannot achieve.

If we pay more attention to the things that around us in our daily life, we can find that most of them can be used to create new things. What’s more, after being created, all of them are being given new life and becoming much more special. And that is one of important rules that most of the designer insist on when they are designing their dresses.

Young Mother of the little Emma born 30 January 2012 and Leonie born February 7, 2013. My articles are about gowns shopping, haute couture cocktail dress and customization of evening gowns. I love blog and I do have a lot of experience and knowledge about custom made women evening wear. Thanks in advance for being here to cultivate your personal interest as well! View all posts by Yasmine Alice De Jessica